The Different Colours and Tastes of Maple Syrup


Many of our customers ask us how and why syrups differ in colour. Some assume that the darker colour syrups must be boiled longer and as a result, produce thicker syrup. This is a misconception that I’d like to clarify.

At the beginning of the production season (end of Feb, beginning of March) the weather outside is cold. Sap starts to flow and is very transparent (clear) in colour. The 2-3% sugar content of the sap is two-tier sucrose sugar. During the few weeks of our production season (March - April), the outside temperature continues to warm and snow melts. Although relatively sterile within the tree, microorganisms are activated and rapidly grow within the sap upon exiting the tree. This warming and subsequent heat enables microorganisms (bacteria) within the environment to grow exponentially. The warmer the temperature gets, the faster bacteria grows.

The enzymatic reaction by these microorganisms in sap causes some level of conversion of sucrose into the invert sugars, glucose and fructose. As the seasons progress this level of conversion increases in volume due to increased microorganisms in the environment. In the beginning, the impact is minimal, but as the outside temperature warms further, invert sugars increase within the sap and subsequent maple syrup. Microorganisms double in size every 10 minutes. By the end of the season maple syrup, although still predominately a sucrose sugar, have higher invert sugars levels (glucose and fructose). This sugar chemistry in conjunction with the carmelization process that occurs when sap is being boiled, causes the syrup to become gradually darker in colour throughout the producion season.

The 4 different colour grades (North American Maple Syrup Council) thus reflect the time of the season the syrup was produced. At the beginning of the season, syrup is graded “Golden”, then "Amber”, then “Dark”, and finally “Very Dark”. As maple syrup needs to have a minimum density of 66.5% sugar content, all grades of syrup contain the same viscosity (consistency/thickness) levels. The darker syrups only “look” to be thicker (tricks the eye) in consistency due to its dark brown colour as compared with the light yellow colour of Golden syrup produced at the beginning of the season.

The stronger maple flavour that is present in later grades is a result of combining the carmelization process with the sugar chemistry structure at that time. Later in the season with a higher percentage of fructose in the sugar chemistry, the combination of that fructose in conjunction with the carmelization process produces a more robust and sweeter syrup. Although it's the same sugar content, fructose has the sweetest flavour of the sugars. 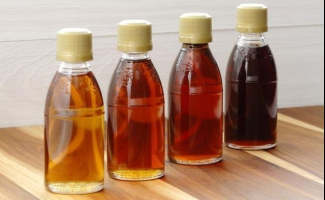 See all blogs
The Danbrie Difference