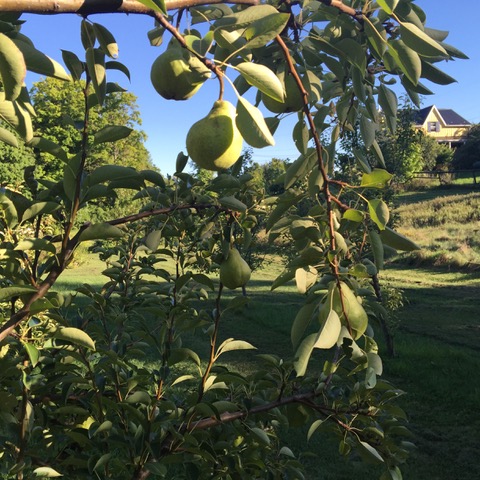 We’re big fans of fruit trees but the truth is that many varieties are not meant for the cooler climates in Canada. Places like the Niagara region are the only areas in Ontario that can successfully grow fruits like cherries and peaches because of its Southernmost location and slightly warmer climate.

We chose Bartlett pears because we wanted to grow fruit that was robust and adaptable. They are hardier and adapt to the cooler climate. Choosing crops that are suited for the climate means we’re able to cultivate them organically. Unlike some larger producers, we never spray our pears with any pesticides or herbicides.

Bartletts are the only pears that have a true pear shape, which has a rounded large bottom half and tapers to a smaller curved neck. The skin brightens as it ripens, transforming from green to a golden yellow.  When mature but not fully ripe, Bartlett pears are crunchy, tart, and slightly gritty, but when fully ripe, they develop a juicy, smooth, buttery texture with a sweet flavour.

Bartlett pears are traditionally known as the canning pear, because they have a definitive flavour and sweetness, and are a good all-around choice for many forms of processing. They’re great in preserves, syrups, chutneys, and more. They also make excellent dried.